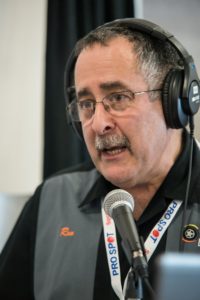 Ron Ananian knows his craft. For over 25 years, motorists have received quality, honest work with a smile at Ron’s repair facility, RA Automotive. “We fix everything but a broken heart,” says Ron. Based in Waldwick, New Jersey, this family-owned professional service business has been named the best in the country by CARQUEST Corporation and the New Jersey Automotive Mechanical Shop of the Year.

It’s all in the family. Growing up, Ron learned some valuable lessons from his father, a mechanic who serviced President Franklin Roosevelt’s DC-3 aircraft during World War II. He got the repair bug helping his father tune up the family car in time for an annual vacation. “He taught me to respect tools and machines. My dad, who worked as the lead mechanic for American Airlines at LaGuardia Airport, would say, ‘There is a place for everything and everything in its place. Think your way through the problem, use your head, be precise, select the right tool for the job and you’ll find your way,” explains Ron, who got hands-on experience as a teenager taking apart and repairing anything mechanical from lawnmowers, motorcycles, and cars to even a washing machine.

Ron and his capable staff help the motoring public find the best treatment for a car’s little hiccups and the bigger ones, too. Crowned the Technician’s Technician by Motor Magazine and known to millions as Ron Ananian The Car Doctor™. On his nationally syndicated show, Ron gives motorists helpful tips on how to avoid repair fraud and deception. Drawing upon over 30 years of repair experience, he tells listeners about even further changes expected in the evolution of the automobile.

The media has called upon Ron to share his wealth of mechanical knowledge. He has been a featured expert on ABC’s 20/20, FOX Television’s Fox and Friends and Court TV and was a long-time columnist for New Jersey Automotive Magazine. Ron also hosted an auto repair call-in talk show on New York’s WFAS-AM radio and on DIY Network’s nationally syndicated program Classic Car Restoration.